I have participated–as an organizer, leader, and volunteer–in a wide variety of STEM public engagement initiatives, especially with K-12 students. I strive to inspire enthusiasm for science and the natural world and trust in scientists by leading hands-on science activities and sharing my ongoing research. The opportunity to interact personally with a scientist can also dispel stereotyped concepts of who is (and can become) a scientist and what we actually do day-to-day. Engaging with the public enhances the quality and impact of my research and teaching, and I have integrated it directly into my research program.
View all of my public engagement activities here.
Check out our public engagement poster “Professional development through evidence-based public engagement”, a comprehensive look at our approach to STEM engagement and ‘how to’ recommendations.
View my curated public engagement resources: BEACON Sandboxes 2017, BEACON / UT Workshop 2018
BEACON Center for the Study of Evolution in Action
2016-present. I am funded by the BEACON Center to spearhead a collaborative effort to expand and improve public engagement. Together with with Drs. Alexa Warwick (Michigan State), Travis Hagey (Michigan State), and Hans Hofmann (UT Austin), I am developing evidence-based training workshops for graduate students and postdocs to engage effectively. Our innovative approach aims to recruit, motivate, and train scientists, and then pair them with existing engagement programs to put their training to action. The long-term goal is to incorporate engagement skills and experience into the academic curriculum. STEM public engagement benefits both the pubic and the scientist! For scientists, engaging can improve communication, teaching, and leadership skills and enrich scientific understanding, within and beyond one’s own field. For the public, interactions with scientists can build trust and support, promote diversity in STEM fields, and increase interest, curiosity, and literacy. Check out my blog posts to learn more about what we’ve been doing:
Workshop highlights! How public engagement (and science communication) is a social endeavor
Frame your science to make it accessible, including for your representative
Reporting back! Highlights from the Public Engagement Workshop
The Diversity of Ways that BEACONites Engage the Public
BEACONites engage! Engaging with the public about STEM and opportunities for training
Shadow a Scientist
Host, Summer 2016 & 2017.The Shadow a Scientist program pairs middle school students with a scientist at the University of Texas at Austin. The students get to observe first hand what it is like to be a scientist in a research area of their interest! The program is run by Dr. Greg Clark. Find out more on the Shadow a Scientist website.

Nerd Nite Austin
Speaker, March 13, 2016. Nerd Nite hosts speakers who are experts on themes of all kinds. During a special SXSW Brain Games edition of Nerd Nite, in collaboration with National Geographic, I explored the world of animal behavior research to uncover the biological basis of social behavior and its consequences. Learn more about Nerd Nite Austin or find a Nerd Nite in your hometown!
Science Under the Stars
Speaker, Volunteer 2015. Science Under the Stars is a free, monthly science lecture series for the public. It was founded and organized by graduate students in the Department of Integrative Biology at University of Texas at Austin. Since 2009, SUTS has hosted over 30 speakers! I spoke to members of the public and the UT community on March 12, 2015. Find out more on the SUTS website.
They Blinded Me with Science
Featured guest, They Blinded Me with Science is a radio show on KVRX 97.1, the student-run radio station of University of Texas at Austin. DJs Ganglion, R Nought, and Chrysalis host science news and speakers once a week, Mondays at 8:30 pm. Listen to my interview on March 9, 2015!
Atlanta Chapter of the Society for Neuroscience’s Brain Awareness Campaign
Co-Organizer 2010-2013; volunteer 2009-2014.  This year-round initiative matches volunteers (students, faculty, and staff) from Atlanta Universities/Colleges, including Georgia State University, Emory University, Georgia Tech, Morehouse College, Agnes Scott College, and Spelman College, with K-12 educators. Many of the elementary, middle, and high schools serve students underrepresented in science. Volunteers lead activities about neuroscience, share ongoing research, and advocate for careers in science. Volunteers are often requested by the same schools and teachers, year after year!

I personally visited 37 schools and ~2,250 students. I also organized Georgia State and ACSfN volunteers for the Fernbank Museum of Natural History’s Science at Hand Day (2011-2013). More than 1,200 people visit the museum every year for this great community science event!

Note: student faces have been blurred out of respect for privacy 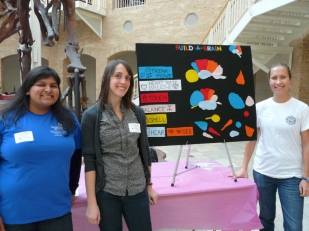 Devaleena Pradhan, Ariana Tamvacakis, and me (left to right) at the Fernbank Museum of Natural History’s Science at Hand Day.

Using Play-Doh to “build-a-brain” at Science at Hand Day. Over 1,200 visitors attend this event annually!

Touch-a-Brain: High school students taking pictures of a real human brain I am holding. They have the opportunity to examine it up close and even touch it! 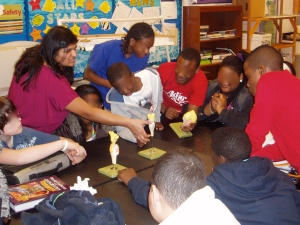 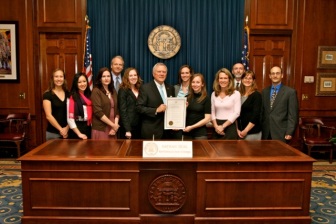 Member, Georgia State Organizing Committee for the Atlanta Science Festival
City-wide events for the first annual Atlanta Science Festival (2014) reached over 30,000 Atlanta-area children and adults! I helped organize and volunteered for events hosted by Georgia State University. 2013-2014
TechTalks, Atlanta Science Festival oratory competition
2nd Place winner, The theme of the 2014 TechTalks competition was “Why does society need science?” Watch my talk below on “Why society needs the science it doesn’t think it needs.”
Co-Chair, Georgia State Organizing Committee for the 2013 Meeting of the Society for Behavioral Neuroendocrinology (Atlanta, GA)
I worked with Chair Dr. Anne Murphy and a team of Georgia State University graduate students to organize and run the 2013 annual meeting of the Society for Behavioral Neuroendocrinology (Program Book). 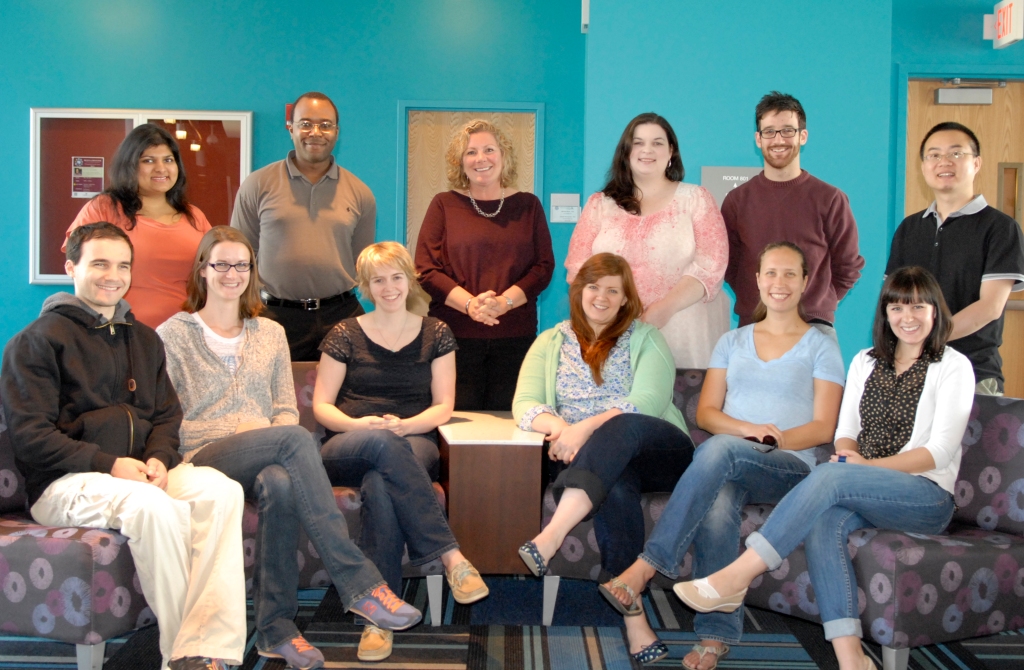